As an experiment, I’m going to try updating each weekday for as long as I can. Each day of the week is going to be based on a different topic, and design reports record the progress of my current card/board game concept. However, since I didn’t start doing this from the very beginning, I’ll be playing catch up for a few weeks…

Summoner is my first attempt to create card games again after an extremely long hiatus. Its goal is to be a Magic clone; specifically, a Magic clone that retains the deck building aspect of the game without the necessity for an ever expanding list of cards. The game broke down things like power, toughness, and keywords into separate cards, and formed rules around the combination of cards into making creatures and spells.


It was also the first and last time I made a huge effort to produce good looking prototypes. Here was the last iteration of the prototype deck before I gave up on the idea: 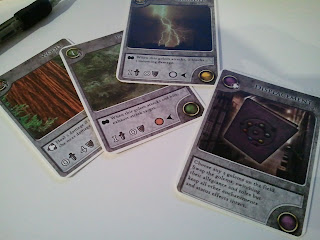 The basic premise was to convert mana into element cards. When an offensive and a defensive element was combined, it formed a golem with the attributes determined by the strength of the elements. Most spells worked like Fireball where you substitute elements to generate a specific effect of variable strength. It felt interesting in theory, but the implementation fell apart quickly.


For one thing, the cards were drawn instead of drafted, and despite attempts to make elements with lower strength “faster”, bigger numbers were always better. Eventually, I wrote in so many special rules that the game started to become as cramped and as unintuitive as Magic became. For those reasons, I shelved the project, but the idea of forming a group of custom creatures to attack and defend objectives stayed, and it was the seed that was replanted into the idea that I’m still working to this very day.