When I thought I’ve designed my card game to my corner, I’ve considered my options and I’ve decided to make some changes, radical changes. So many changes that only things remained were the two principles of rock-paper-scissors ship battle and the use of the pirate dice. Well, that actually fixed a lot of things in place. So how different could the new iteration look? Well… 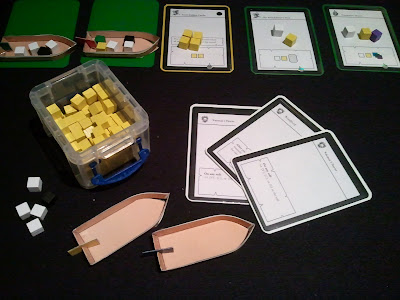 Instead of ships being represented by ship cards, the players actually have paper ships… the pirate and cannon crew cards became pirate and cannon cubes. Treasure from the locations? Cubes. The only thing that remained cards were the locations and the single use voodoo cards. Instead of forming ship and crew with cards, you loaded cubes into your ship… when attacking, you added cubes to your ships. Ship to ship combat still revolved around the strategy cards, but the cubes determine the dice numbers when cannon or melee rolls were made.

The changes looked good in theory. It radically redefined what information was hidden and what was known  since you can’t put treasure or crew cards face down. Treasure hunting also became very eurogameish when players basically look for the best way to obtain the most treasure in the current round. Ship to ship combat was available to throw players seriously off-balance when necessary.

Unfortunately, the radical change of appearance was accompanied by rule changes that broke the system: for example,

among other things. As a result, I believed the noble experiment of radically changing the game to a board game failed… but changing the game’s format gave me a lot of insight about the workings of the core mechanics, namely that the pirate/cannon strength numbers play an extremely important role in combat and should not be arbitrarily quantized; that the treasures were not interesting enough to form a eurogame system around; that forcing players to take too much risk for removed real choices. Those were all lessons that I took to heart as I humbly remove all the cubes from the game and transform everything back into card game format.
Next week: heavy consolidation.