UPDATE: From the field testing that took place after the initial design went out, though, things are not going well. I’ll have to figure out what can be salvaged and what needs changing… it looks like this will be a temporary stay after all. 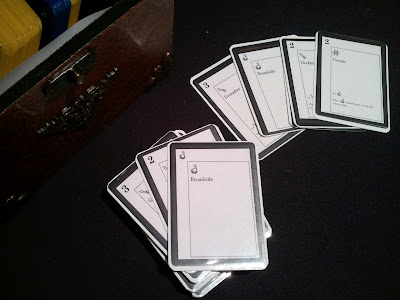 This version of the game focused on the consolidation of assets in games and the simplification of rules… I also wanted to add some cooperative aspects to the game, which had not worked out so far. But before I make any changes, here are the current rules:

Components:
The game consist of one deck of 36 pirate cards (shown in picture), 24 plunder cards, and 16 captain cards. The full list of individual components are:

Captain Deck
16 unique captains, each with one special ability.

That’s the gist of the game. Starting from next week I’ll actually go over the details of individual test sessions, the tester feedback, and some horrible truth about the difficulty of designer expectations versus playtesting reality. That’s when the pain begins…