This is the newest strip from The Escapist’s Critical Miss. Satire be damned, when it comes to cool concepts you just can’t go wrong with a name like “Steampunk Feminists vs. Zombies”… so I’ve decided to come up with the framework of a card game based on the title. At the very least, it’d be a no obligation brain release from all the trouble I’m having with my current game’s design.

True to the name, the game must contain elements of steampunk, feminism, and zombies. The easiest design is to do a co-op zombie apocalypse survival game, and then layer it on top with steampunk gadgets and a smattering of feminism ideas… and I’ll be doing that here. KISS and all that junk.
Here is how it breaks down: 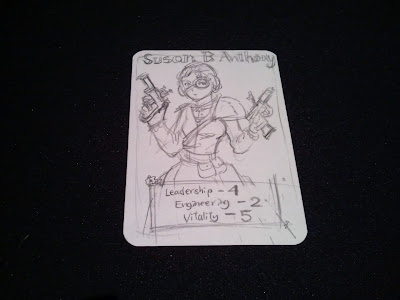 Character Cards: each player is represented by a character. Each character has a few statistics that affects her effectiveness in specific game related tasks: 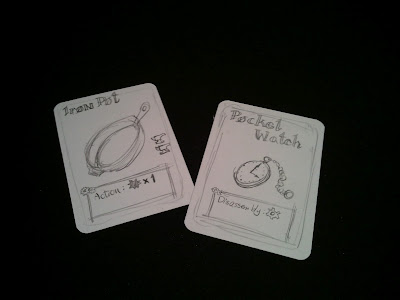 Materials: The player can spend actions to scavenge for materials. Most materials can be broken down for parts, shown on the right side of the cards. They might also serve directly as makeshift barricades or weapons, though they’re not very effective. Finally, advanced disassembly techniques can break certain materials down into specific gadgets, but the disassembly process requires access to a dissembler, a class-restricted machine. 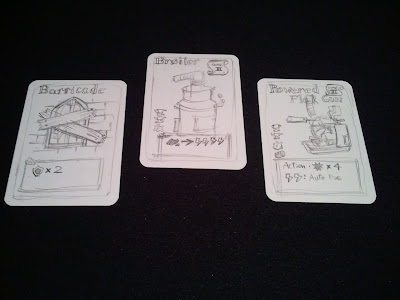 Plans: The player can also spend actions to acquire plans. Most plans require materials to assemble – the list of components required are on the left side of the cards. Barricades can directly block zombie attacks round after round, while weapons can directly eliminate zombies. As the players gain more rights to use advanced steam power and assembly machines, they can assemble power generators to power automatic weapons, freeing them precious time to continue their road to women’s suffrage. 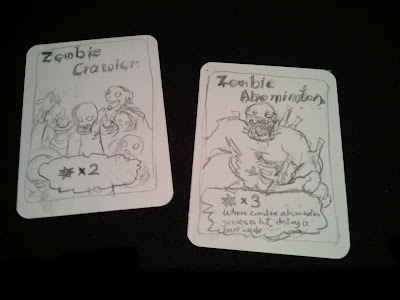 Zombies: You just can’t get enough of ’em. After spending all available actions, each player must add additional zombie cards to the horde. The zombies shamble from house to house, bang on barricades, and if the player is unlucky, they just might get a chunk of flesh or two bitten out of them. As the zombies are eliminated, more and more powerful strains of zombies enter the fray. To stop them once and for all, the player must work together to advance the feminism track… 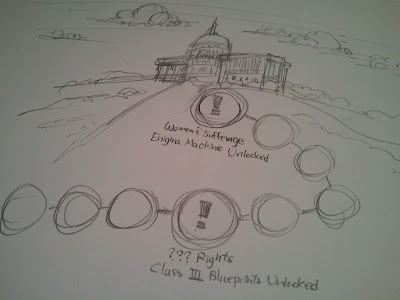 Feminism Track: Once the player feels secure that their barricades would hold, they can spend actions to assemble and make speeches. These actions would push the players further up the feminism track. At certain milestones, all players would gain the rights to use a new class blueprints, allowing them to build more powerful machines to fight the horde. Ultimately, they must advance to the end of the track to gain the right to vote, then acquire the rights to build and deploy the Enigma Machine to end the zombie menace once and for all.

And I’m done! Since I’ve ripped this concept from someone else it’d probably be a bad idea to actually develop it (besides, the whole zombie survival thing is seriously overdone lately), so feel free to copy/steal/redistribute/whatever.