Last Monday I began brainstorming ideas central to the Pirate movies, and after mulling over it for the rest of the week I’ve found the concept of deception to be the most intriguing. Deception was present, or it was intended to be present, in every stage of the pirates card game design, where part of the crew you set sail with are suppose to be hidden, but in practice what your enemy brought to a fight never seemed to matter as much as your own composition.

So I kept the idea of deception as the central mechanic and narrowed my focus. When it comes to deception, two types of games come to mind: hidden role games like Mafia or The Resistance, and hidden value games like Dead Man’s Chest’s very own Liar Dice (okay, the movie didn’t invent the game, but it certainly brought it to most people’s attention). Of the two, I’ve come up with an idea to work with hidden values: the art of running researches and the possible deception involved in securing funding while having honest breakthroughs versus lying through your teeth.

In the beginning, I’ve started the idea with two very basic concepts: research projects and research breakthroughs, which supports the projects. The projects are public knowledge: everyone knows you’re working on a project and trying to complete it in time. The breakthroughs, however, are hidden by default: you may have materials strongly tied to the project (yellow), “wildcard” materials (green) that supports the project but not to the degree of the “pure” stuff, and fake materials (white) that are made up stuff to prop up your project’s credibility. The deception surrounding your research’s actual progress forms the core idea of the game. 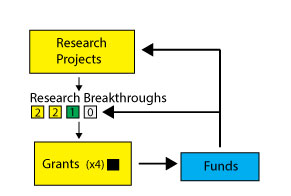 Expanding on this core idea yield the following:
Let’s say your research’s real progress is the sum total of your relevant material’s strength (let’s just call breakthroughs “materials” for now). Strong materials gives you 2 points, related materials 1 point, while made up materials obviously 0. At some phase in the game, investors would come in and invest more funds based on the number of materials you have, not the actual progress of your research. In turn, you can pour those funds into acquiring more projects and getting actual breakthroughs. This sets up the incentive for players to risk putting down fake progress because it means they’d get themselves the real stuff faster. We still need a reward mechanism for busting other people’s lies though: 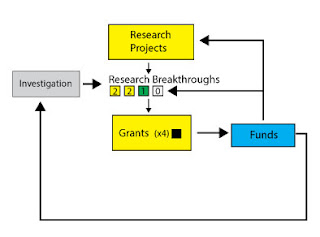 Here is one possible implementation of the investigation mechanic. An opposing player must spend some of the grant money for a private investigation into some aspect of the research. The more you pay, the more through the investigation becomes. For example, a cheap investigation can only randomly expose whether one of the materials is completely fake; another one might reveal several pieces of info at once; the strongest would probably tally all the materials and wager the actual progress is below a certain level. Problem is, I don’t feel like there’s a good reward to a successful investigation that is thematically and mechanically sound. I suppose the one paying for the investigation might get money from a lawsuit, and maybe this model is ultimately the best one (since it is extremely simple), but the one that I’m going to try developing actually looks like this: 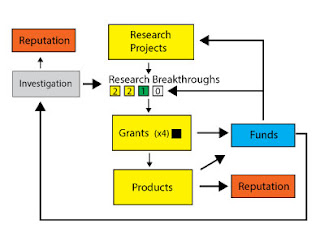 So I’ve added one more layer to a research project, that is when you have enough actual progress, you can open up those materials to sell a real product for money and reputation. Reputation becomes the game’s real measure of victory, not money. It gives research projects a natural life cycle so there’s no need to clog up the play space with projects where all progress are real, and I can balance the game to give honest players appropriate rewards. I can also set up a reward for investigations that thematically makes sense – reputation – where exposing other researcher’s bad practices would earn you some reputation but falsified claims might actually give you a reputation penalty. That part of the diagram might be changed, to be honest, but I think I’d very likely keep the “release a product” part of the project life cycle – it completes the game in ways that the simple version simply cannot.
I have some other ideas such as having collaborating research partners (splitting funds and reputations), or special restrictions attached to specific projects, but the general idea is sound. The next phase of the project involves a bunch of heavy calculations to come up with an initial set of numbers attached to all the different components of the game. Math… I guess… I’ll do that next week. Yup!