Alright, so maybe Art Friday as a concept isn’t exactly working out. Weekends in general are just kind of a leisure time for me, and I’d rather not let my studies get in the way of my pleasure seeking (seems backwards somehow…). As a result, I think I’ll just stretch the art stuff to include the entire weekend from now on. That way, I’d have more opportunities to get stuff done and maybe spend more time on a piece instead of rushing everything to completion.

Despite the heat, this weekend ended up being very productive for me. I’m able to go back and start working on the Pirates game (again!), and as a result of that I’ve drawn a few illustrations to go with the new card designs. They’re more of a study than anything for now, but I’m still quite happy with the output: 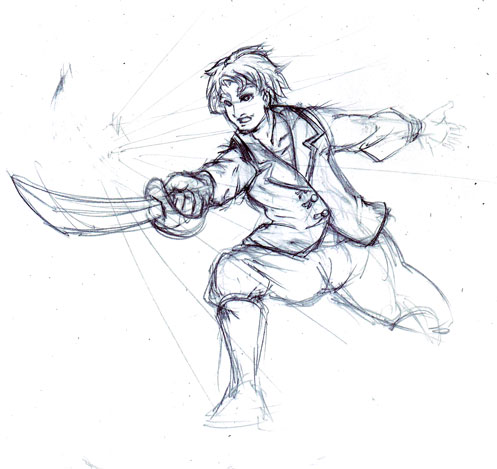 This is the illustration for “strike”, the first study I’ve done. The foreshortening needs work, and the soon to be cropped parts of the drawing are crude, but I think the pose is effective.

Here is one for “counter”. I like the illustration, but it’ll probably be scrapped later since the card it describes don’t trigger unless the player is under attack. This probably works better as “ripose”. Poses involving more than one person is always tough, so at least I’m happy with the characters’ layouts. 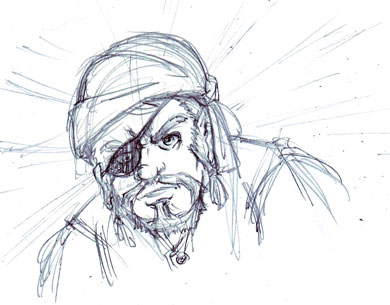 This is “focus”. Pretty simple. The hair and the beard turns out well. 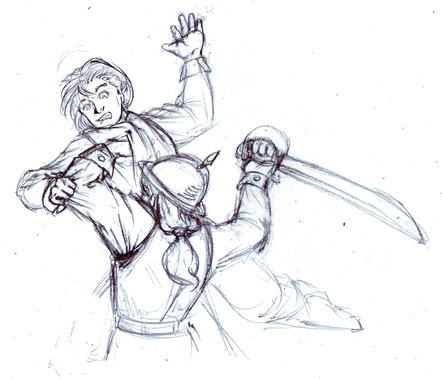 This is “brutalize”. Now that I have a second look I guess the poses are a bit wonky… at this point my hands are getting tired but it’s also loosening up, so the anatomy looks wrong in several places but the idea behind it feels right. I was wondering why the right arm of the sword guy didn’t look right – I think the forearm should be brought to the front. 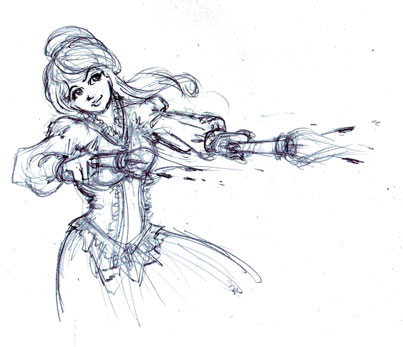 Finally, one for “unload”. Something frilly to finish up the set of illustrations. Man, that right arm looks super short.

After scanning the pictures, I’ve also messed around with painting one or two of them: 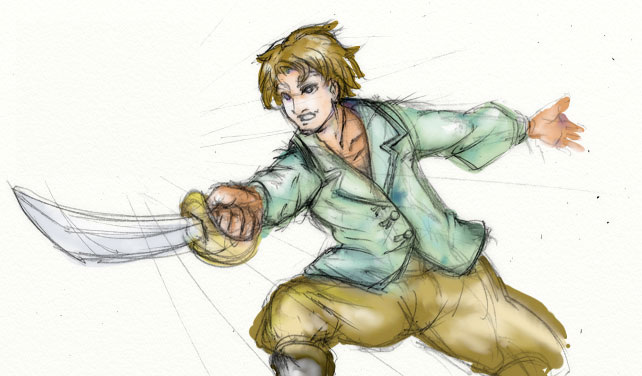 I tried messing with ArtRage‘s watercolor. I don’t know why, but compared to their oil (not that I’ve actually painted with oil based paint) brushes the watercolor just feels wonky. It looks so cool when it blends right, though. I suppose one of these days I’d finally figure it out. Until then I should mess around with it every now and then. 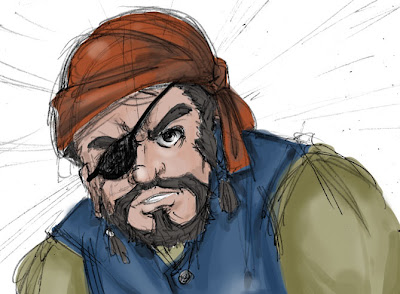 One in Photoshop, a quickie. I need to find a way to get rid of flat slabs of color since turning on pressure sensitive size and opacity never feel right for me, so I end up having brush strokes with round tips.

Now, to prototype the cards… then I can do another post about the design changes to the game.