Skip to content
Human creativity is weird. If you force yourself to think about new solutions to a problem sometimes all you can get are dumb fixes… but if you step away from the problem for days or even weeks, sometimes the solution would hit you on the head like an anvil out of nowhere. After so many previous failures, I’m not so ready to call this the design that solved all the problems, but at least I feel like it’s getting somewhere again.
In other news, I’ve learned that tags can do something other than serve the mysterious SEO gods. I’ve added a new tag to keep track of all the posted related to this particular game’s design progress:
pirates game wip
To more or less reboot the design process, I’ve decided to take out treasure points, targets of opportunity, and all the other mumbo jumbo that’s related to scoring more points… I’ve reduced the game back down to its basics, a rock-paper-scissors game. I’ve also mentally sort through all the feedback I’ve gotten from previous play tests and incorporated a few suggestions:
So I’ve added an additional mechanic to the basic “deal X damage” formula: modifiers that’d affect actions in the next turn. And with that, here’s the component dump of the latest pirates card game: 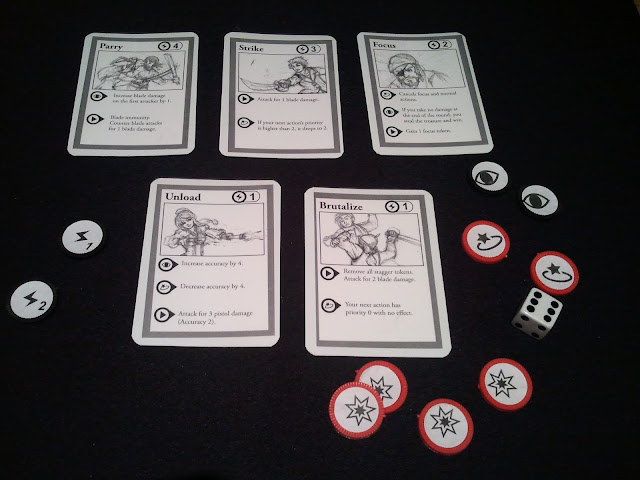 While still themed around pirates, the game is no longer about ship to ship combat with captain and crew – now we’re down to fighting over treasures on an individual level. A simplified list of rules is as follows:

Balancing are a-coming, so I’ll discuss the cards and the justification for the rule changes in detail next week. In the mean time, here’s an example game of how the game works in its current form:
(Oops, I’ve forgotten to put down stagger tokens completely. Oh well, the player who takes damage is usually staggered…) 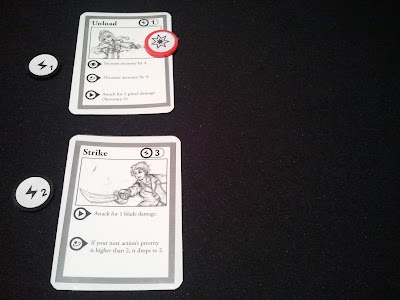 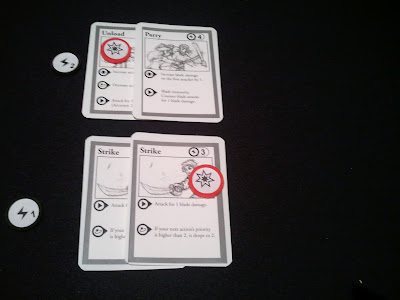 However, strikes can be parried. Parrying deals damage to the aggressor to inflict stagger (and it does resolve, since stagger for strikes resolve after the normal action). 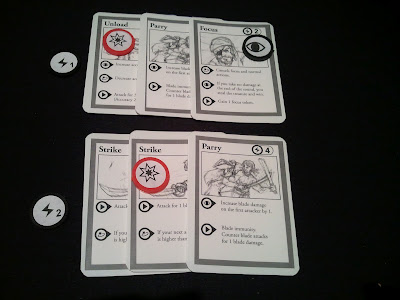 You can unload guns on a player that’s standing around ready to parry for a 1 in 3 chance to deal 3 damage (in most circumstances, winning outright). Better yet, you can play focus to gain the focus buff. The buff makes the next gun attack 100% accurate. 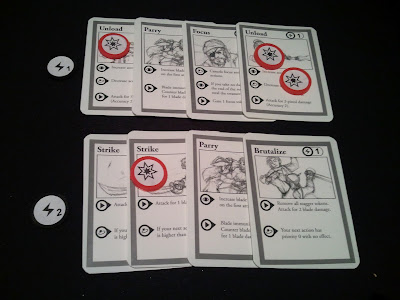 Next week: Justify your game.