Before I move on from Pirates to Bar Fights, let me finish explaining how the revised pirates duel work. The trinity (Strike, Parry, Focus) forms the core of the system. Because focus is not an attack but a bonus to another action, I added another card that’d benefit directly from focus and adds a little randomness to the game, hence Unload. Since Strike at this point would have advantage over two cards (Focus and Unload), I’ve added one final card that’s sort of a bigger counter to Strike – and that’s how Brutalize came about. 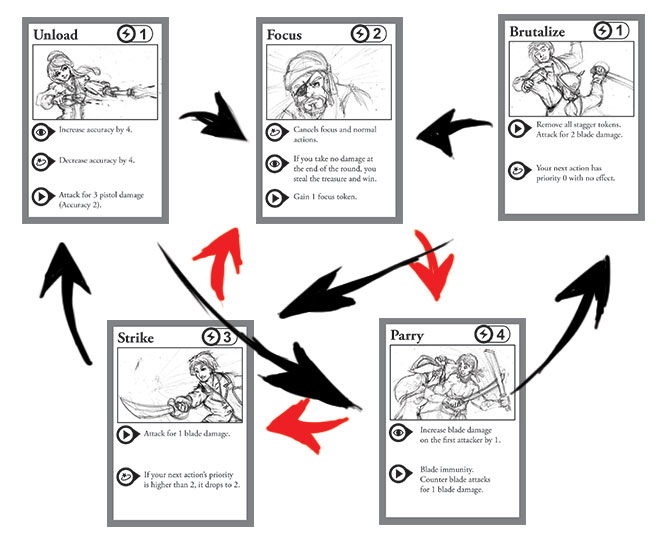 Staggering as a status was added to the game to resolve some of the hard counters between cards. Focus was added to shift the attributes of the cards so the counters would work differently from one turn to the next. This is all nice and well, except… well, it isn’t. The web of cause and effect gets fairly difficult to explain, and ultimately the complexity counteracts the attempt to reduce a sense of randomness to the card choice – between the focus buff and the stagger debuff, there’s way too many combinations of resolutions for any normal player to keep track of.

And then there’s the multiplayer version of this game, where you choose an attack and aim it at another player, then they still simultaneously resolve by order of priority… it’s just chaos from that point on. Honestly, I would still like to run a small test with these rules just to see how chaotic the attack guessing game goes, but I never got a chance over last week, and I felt like the premise should stay, but I should stop trying to make the game so deterministic.

Let’s introduce some chaos into the game.

I watched a rerun of Dead Man’s Chest again over the weekend (is TNT just showing this movie every other week?), and the bar fight scene gave me an idea. Let’s remove focus and brutalize and start fresh with a new trinity: 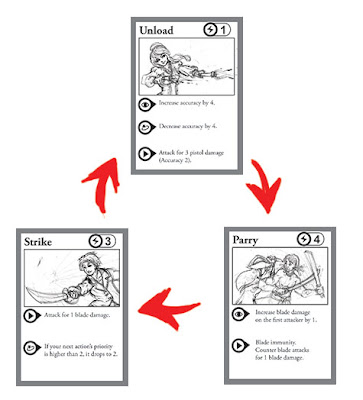 Now, let’s change Unload into some form of liquor. “Unloading” now means smashing the bottle on someone’s head. We’ll also untangle all the priorities and simultaneous resolution so besides parrying to counter, all the actions are played one card at a time. We’ve untangled the game completely and now we’re just playing a basic “take that” game (every turn a player toss a damage dealing card, some cards are there to block attacks, etc).

But the liquor part of the game can get interesting. Suppose there’s a running tab on the amount of liquor smashed and consumed, wouldn’t it make sense that the guys who lose the fight would have to pay the tab somehow? What if the liquor can be consumed to strengthen strikes? We arrive at the following rules:

If the numbers work out right, there should be an escalation of cost built into the game that’d make it interesting for players to decide when to stay and when to quit. There’s a much bigger factor of randomness, but I think the new design is “light” enough that more randomness might actually make the game better.
And now, back to assigning numbers. I hate this part.